The 9 Best Bakeries in Louisiana! 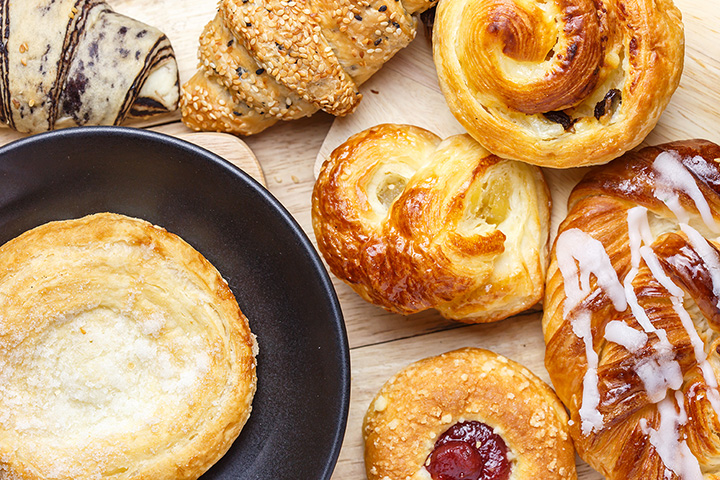 A good bakery has a way of wrapping up the atmosphere around it and stuffing it into a delicate, hand-crafted pastry. Bringing all the comforts of home into every bite, time and time again. In Louisiana, so many diverse bakeries exist. From traditional bakeries, to Cajun-influenced bakeries, to French bakeries and bakeries that specialize on the classic Louisiana goody king cakes. Here are 9 of the best bakeries in Louisiana that are sure to fire up the taste buds.

Located way uptown on bustling Oak Street, this artisan bakery uses only the finest all-natural ingredients and organic flours. Everything is made by hand from scratch and cook in a stone hearth oven. Their daily spread of breakfast pastries, sandwiches, organic coffee, and artisan breads have locals coming back day after day. Founded by Sean O’ Mahoney, this New Orleans native has always been passionate about bread baking. So much so that he eventually studied under Master Bakers and World Champions at the French Pastry School graduating with honors. After, he wanted bring back Old World French breads and baking style to the city he called home. The store also has a full line of vegan tea biscuits, brownies, tarts, and more along with some gluten-free items to meet the needs of all their customer’s diets.

One of the best authentic French bakeries in the state, Mr. Poupart came to Louisiana in 1965 to continue his pastry chef career after working Paris. His wife came with him and today he still works in the shop alongside his son Patrick. For over 40 years, they have been making old world French breads, French pastries, sweet treats, and savory soups as well as delicious sandwiches. After falling in love with Cajun country, Mr. Poupart also added some of the regions own flavors including beignets, Doberge torte, and puff-pastry king cakes. This all goes along with their chocolate eclairs, delicious fruit tarts, slices of opera cakes and more. Going to Poupart’s makes the guests feel like they are stepping into a French village bakery with a Cajun twist.

Since 1949, Gambino’s has served the New Orleans area. Though Joe Gambino bought the recipes, name and retail shop a few years before from the Beulah Ledner Bakery, and even got his hands on the beloved original recipe for their famous Doberge Cake. Joe quickly became well known for his cakes and pastries, inspiring him to open under his own name. They then expanded within the city itself and today Gambino’s can be found in several cities across Louisiana. Their king cakes are for some a family tradition, while their decadent Southern pecan pie is made from scratch. Keeping true to their home city, Gambino’s also makes their own New Orleans French Bread, Muffuletta loaves, and Italian olive salad. Stop by this traditional bakery that has the flavor of New Orleans.

Serving the Baton Rouge community for over two decades, Ambrosia is known to serve some of the best cakes and pastries in the region. Some of their hottest products are the Fresh strawberry cake and red velvet cake. Other favorites include the Scarlett O’Hara and luscious Italian cream. Freshly served gelato is available for afternoon pick-me ups. Their traditional pies, such as their famous pecan pie, and cake balls are also some of the other sought after cravings. An entire breakfast menu is available in the morning including pastries alongside freshly scrambled eggs, hash browns, and gourmet coffee. Wedding cakes, cheesecakes, cookies, tail gate packages, you name it and Ambrosia’s can do it. This bakery is a true treat in the Baton Rouge region.

The bakers at Julie Anne’s in Shreveport are early risers. They bake all their cakes, pies, pastries, cookies, and breads fresh every morning before the sun comes up. The smell lingers throughout the store, dragging customers in day after day. Being open from 6:30 a.m. till 6 p.m. everyday but Sunday customers have plenty of time to get their hands on some handcrafted delicacies. Pastries such as bear claws, cinnamon rolls, and cheese Danishes are a few of the classic. Some more Louisiana inspired pastries include the filled croissants and chocolate croissants along with the Mardi Gras king cakes they make every carnival season. Breads range from jalapeno cheese, frosted raisin and classic French bread. Having been serving the region since 1992, the shop can ship anywhere and they are open for lunch every day open.

This full-service specialty bakery and coffee shop is owned by Baton Rouge native Stephanie Bueche Hansen who had a passion for baking handcrafted specialty items. Opening the doors in August 2013, Les Amis prides itself on one-of-a-kind flavors no matter what the delicacy may be. They change their cupcake and cake ball menu by the week along with the cakes by the slice and cheesecakes in shop. Some of the bold cakes include a mocha espresso cake, strawberry silk cake, and Grand Marnier cake. Gourmet cheesecakes include a caramel pecan turtle, Almond Joy, and peanut butter brownie. Cupcake flavors can also be made into layer cakes and the flavors are endless. Bananas Foster, hazelnut cappuccino, margarita, and Snickers are just a few of the wild flavors that also are the flavors for the cake balls! Go wild and cherish the rich flavors of Les Amis Bake Shoppe.

Doubling as both a bakery and deli, this bakery has been serving the Lake Charles area in southwest Louisiana ever since 1989. Family owned and operated, their homemade sweets, cookies, cupcakes, and cakes strive to bring out unique flavors. Their cakes are topped with made from scratch buttercream icing, and have both classic selections along with contemporary selections all decorated to simple elegance. Some original favorites are the sweet potato cake, mocha espresso cream, and apple caramel cream cake. Still, for weddings they are some of the best in town offering tiered cakes for the special occasion. Each tier can have a different flavor, making for the ultimate guest-satisfying experience at the wedding. Their creations, especially in the deli, are inspired by both their Cajun and Italian heritage making for bold flavors that fill taste buds with pure satisfaction.

Sucre is a hip artisan dessert and confection experience that entered the New Orleans scene in 2007. Being part of the revival after Hurricane Katrina, the little “sweet boutique” grew in the hearts of many New Orleans citizens as a go-to bakery in the area. Their delicious creations, like the macaron trees that come in small, medium, and large sizes, are imaginative. Some original favorite cakes include the peppermint named cake and the Lucifer, which is a deviled food cake topped with chocolate cream fudge and chocolate buttercream. Their modern approach to sweets, confections, and baked goods allow their customers to experience bold new flavors all the time. Still, don’t sleep on some of their classics. Chef and co-founder Tariq Hanna won top 10 best eclair in the world by Food & Wine Magazine, and the store is well known for their classic macaroons, Sucre confetti cake, and Big Awesome cookies. They also whip up 15 different flavors of chocolate as well as varieties of gelato and coffee. Now boasting three sweet boutiques and one Salon Restaurant, Sucre has grown into the heart of New Orleans for their modern twist on classic baking.

The tiny town of Harahan is located just outside of New Orleans, so it is no wonder the people there have a passion for fine baked goods. La Louisiane brings the moist, fresh taste of baked goods right out the oven using exclusively the freshest ingredients around. They work with many New Orleans restaurant, hotels, and cafes in supplying them with their vast menu list. The family owned and operated business is so busy that they need a week in advance to make desserts, cakes, and more for many occasions. Some of the unique cakes include a Fleur de Lis wedding cake that is a white almond cake filled with almond mousseline and iced in Swiss buttercream. Also included are some classic cakes like the pineapple upside down cake, classic buttercream cake, and Chantilly cake. Of course, being from south Louisiana, this bakery specializes in the famous carnival time king cake that can be shipped and come in flavors such as pecan praline, strawberry, apple, or cream cheese filling. Cupcakes, cookies, pastries, cheesecakes, and more are all baked right here with love and attention at this classic bakery. Call in today to get an order started!

View more Louisiana Bakeries and Pastry Shops.
Select a Louisiana town to find
the Best Things-To-Do and Places To Go around you