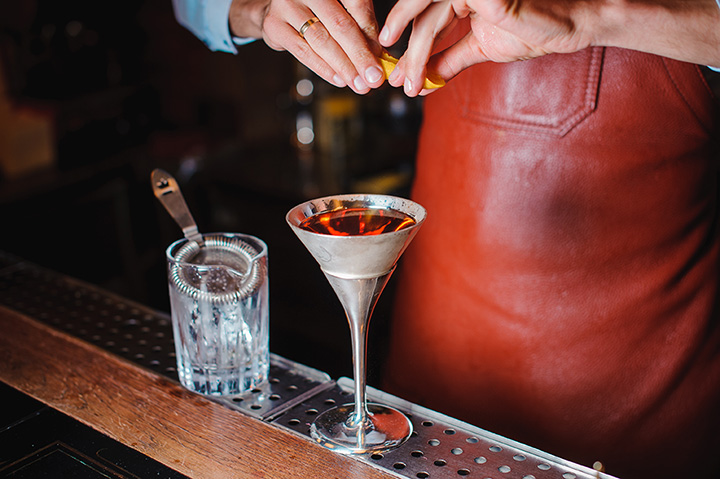 Clandestine, hidden, secret. That’s what it was like trying to find a place to enjoy a drink during Prohibition. Recapture that underground vibe at the modern speakeasies of Louisiana. Sure, they aren’t illegal spaces anymore, but they transport you to a bygone era. From New Orleans to Baton Rouge, here are the best speakeasies in Louisiana.

Looking for some great live jazz and a cool cocktail? Head down to the Spotted Cat Music Club for both. This all cash bar has serious bartenders who know how to mix up a great drink. The music is serious, too, and flows non-stop till the wee hours of the morning. It’s a great combination of old and new, and you’ll find a different vibe here than the louder, more crowded bars in the French Quarter.

Appropriately named because of the scandalous nature that alcohol played during the 1920s, Hayride Scandal is the perfect place to experience the sights and sounds of a speakeasy-style bar. Complete with whiskey and craft cocktails reminiscent of that era in country’s history, this popular favorite offers the best in the arts, crafts, and history of drinking in the South. Definitely a one-of-a-kind place that should be on your list of places to visit.

Part of New Orleans history since the late 1880s as a restaurant and hotel, 21st Amendment Bar at La Louisiane became even more popular during the 1920s when alcohol was prohibited. Owned by numerous mobsters, the bar still is brighter and more open, albeit with historic reminders scattered everywhere. If you’re looking for hand-crafted cocktails like the popular Frenchy.

Another of Louisiana’s unique bars, Bar Tonique is the New Orleans answer to a speakeasy establishment popular during Prohibition. With an eclectic mix of old and new, the service is superior and hand-crafted cocktails are anything buy ordinary. Flights, mules, punches, and Mary’s are original and well worth trying. For those who prefer non-alcoholic beverages, you can find sodas, phosphates, and cream drinks, too.

Preservation Hall is THE place to come in New Orleans if you want authentic jazz. Shows are scheduled several times a day and you won’t find a better place than this for great music and a true speakeasy look and feel. Juice up before you get there, though, because they don’t have a bar inside. Seating is limited, and the lines are long, so get there early and plan to stay late.

Located inside the Windsor Court Hotel downtown, you might miss the Polo Club Lounge if you didn’t know to look for it. Hidden beyond another bar in the hotel, you’ll find awesome made-to-order and handcrafted cocktails and feel like you’ve been transported back in time to the 1920s. The live music is great, and it’s a great place to come with friends.

Boasting a classy old-world look and feel, Sazerac Bar is a premier New Orleans bar located inside The Roosevelt Hotel. Named after what has been reported as the first mixed drink, this bar is history incarnated. Perfect for a night out with hand-crafted drinks and great conversation, the Sazerac is to be experienced.

The cozy eatery in downtown New Orleans is hidden from the general crowd of people looking for a place to find great cocktails, beer, and wine, much like the speakeasies of years gone by. With a menu of food described as contemporary Southern at its best, the drinks here are inspired by historic and international ideas. The surroundings are worth seeing all by themselves, but you won’t be disappointed by anything here.

You wouldn’t expect anything less than the best drinks and live jazz from any place located on Bourbon Street in the heart of the French Quarter and you won’t be disappointed with the oldest club in town, Fritzel’s European Jazz Pub. Folks from all over come to partake in the libations and atmosphere created in this unique hidden club where you can dance and drink the night away.

View more Louisiana Bars and Saloons.
Select a Louisiana town to find
the Best Things-To-Do and Places To Go around you